The purpose of this post is threefold: (1) to answer the question, “Who’s the best player that’s moved to the Premier League, at the time of signing?”;1 (2) to convince Ryan O’Hanlon to abandon Google Sheets in favor of R; and (3) to dismay fellow United fans everywhere.

O’Hanlon posed this question on his excellent podcast last week. Can you find one player who was considered top-5 in the world when they signed for a Premier League club? Difficult to say. In the group chat, my friends and I ventured some candidates: Michael Ballack, Andriy Shevchenko, Fernando Torres, Eric Cantona, Dennis Bergkamp, Paul Pogba, etc. Most of these players’ primes, however, were either behind or before them.2

For a more precise approach, I suggested we tally each player’s FIFA rating the year they signed with their Premier League club. And while I often take umbrage with FIFA’s appraisals, it’s a relatively unbiased approach.

I now needed two sets of data: Premier League signings and FIFA ratings. The former is available on Wikipedia, and I found the latter in a GitHub repository. Sadly, the ratings data only goes back to FIFA 10, so I’m settling for a mere decade of data.

After reading the url, this required some string manipulation via regex:

Footballers have journeymen, roundabout careers ill-expressed by a single <li> on Wikipedia. They can leave the Premier League and return multiple times, sometimes playing for multiple clubs each time. They can play for multiple clubs in a single year. This complicated the ‘rectangling’ process, since I wanted to preserve a row each time they returned.

players now has each player’s name, their club, and the year(s) they arrived.

The ratings data is thankfully cleaner.

FIFA ratings can fluctuate during the year, and this particular dataset preserves each unique rating. Messi, for example, apparently bounced between 95 and 94 during the 2010-11 season. Which is the ‘correct’ rating? Should I take the max? The mean? After reviewing some of the results, I settled on the min.

Ok! Now we can finally answer! 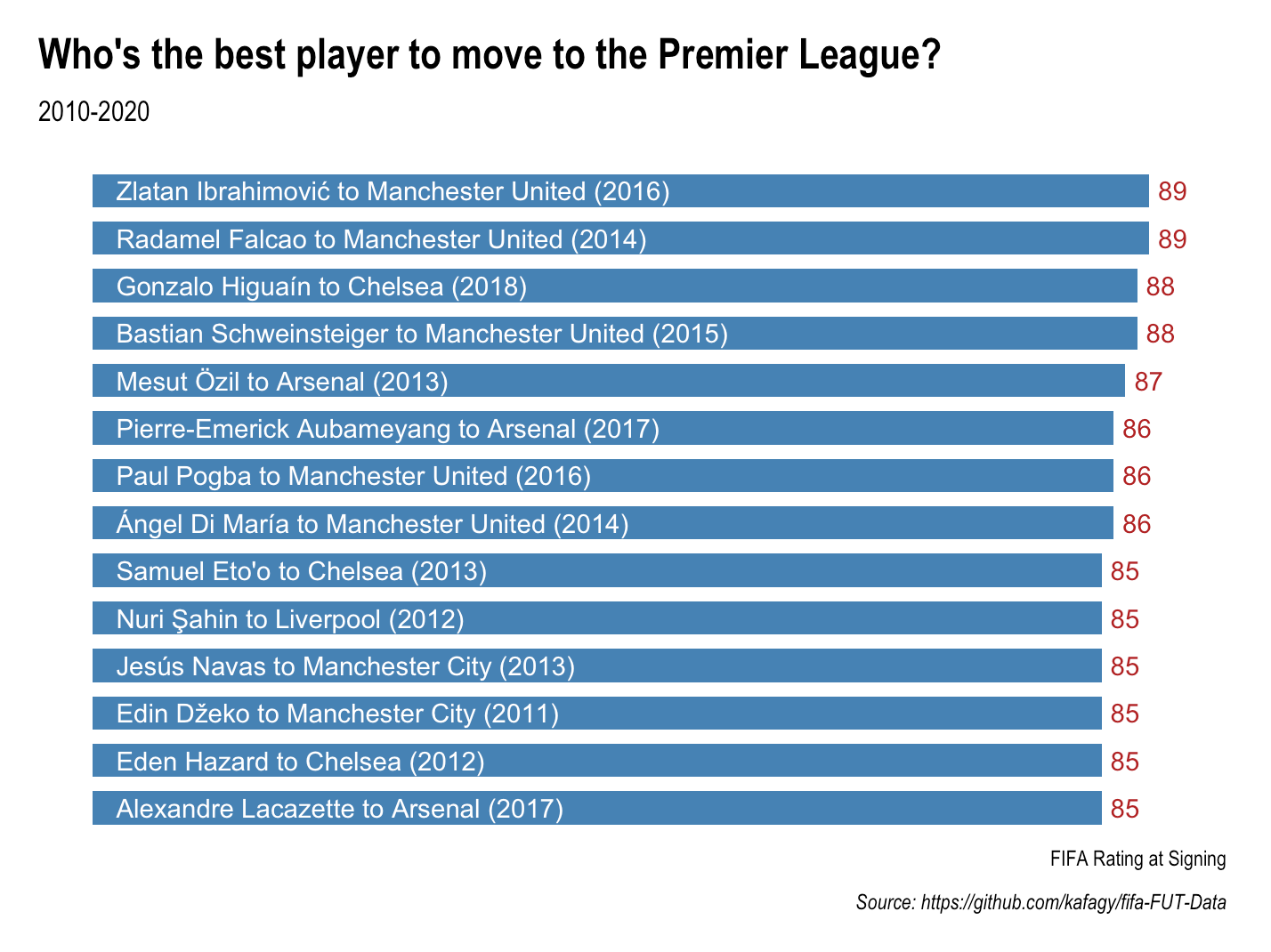 Who else but the Zlatan? Sadly, here’s Manchester United buying five of the alleged best eight players to move to the Premier League over the last 10 years and having little to show for it. Falcao and Di Maria were busts, Schweinsteiger was in no way an 88 by that point, Pogba’s on his way out, and Ibrahimovic was already coming out of his prime (although he did enjoy one good season there).

It is interesting that no player with a rating in the 90s has moved to the richest league in the world. To be fair, however, there aren’t many players of that quality. I can only think of four 90s players that switched leagues in the last few years: Hazard to Madrid, Suarez to Barca, Neymar to PSG, and Ronaldo to Juve.

Aside: Down with the Glazers and Woodward!