I am a tidyverse enthusiast. The proof is in the pudding: of my six packages on GitHub, only one DESCRIPTION contains a non-tidyverse package (rcicero, tidyjson). I once contemplated rewriting these packages sans the tidyverse–for science, learning, growth, bragging rights, and character building–but I broke into a cold sweat once I typed plot. Admittedly, my reliance on the tidyverse might be considered a crutch. Do I really know R, or just the conventions of a popular subset? A different question for a different time.

The inspiration for this post was to practice some UNIX command line magic before bringing the data into R. I recently worked through Sean Kross’ excellent Coursera course, The Unix Workbench, and wanted to groove a little in the terminal. My question was this: which tidyverse packages do I use the most?

First, I had to grep for all the tidyverse exports (e.g. “dplyr::”, “purrr::”). Towards that end, I wrote a small bash script that loops through an input, searching for each item within the package R/ directories, and then counts the output lines.

I named the script count_namespace_exports.sh, granted the execution permission, called the script with the tidyverse packages, and piped the output into a file.

Now to read the data into R for cleaning and visualization. 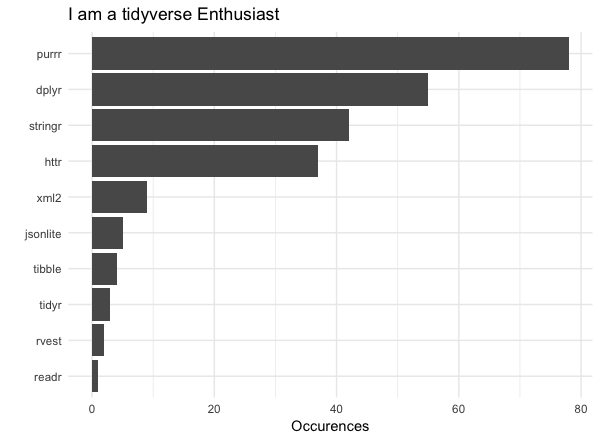 Was surprised to see that purrr overtook dplyr. Now to ascertain from Terminal which functions I use most.